First of all: after you update the plugin, delete your browser/plugins caches.

Until now, Yasr use to work with a jQuery plugin called rateIt.
After a lot of under the hood work, it’s now working thanks a library called rater-js.

What’s the difference for the final user?
Not much, except for 2 difference:

For Yasr Pro only user:

You can now upload your custom icons, without the tutorial!
Just upload 2 square .svg icons and you’re set, take a look to the new settings: 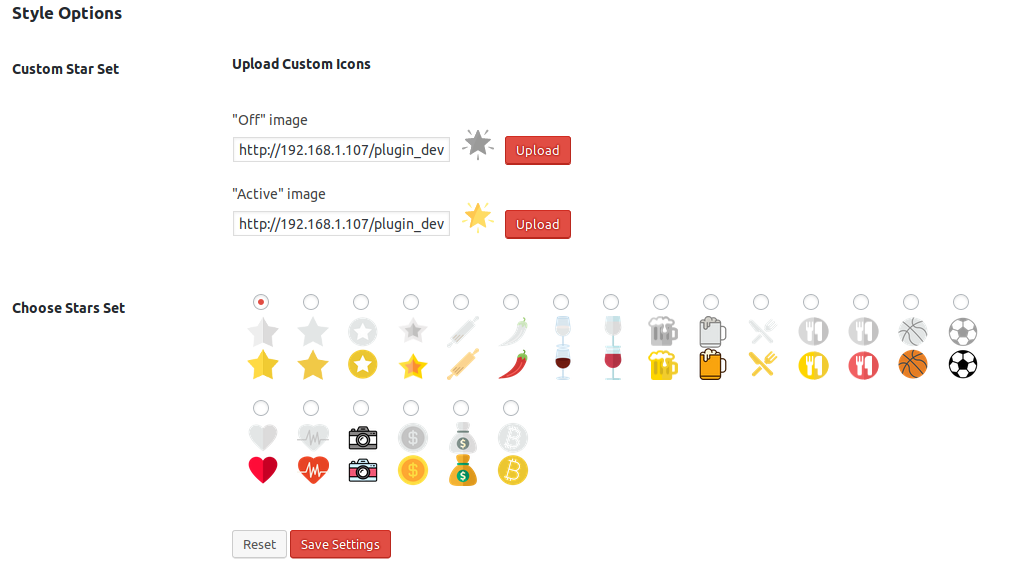 Again, remeber to delete all your caches after the plugin is updated 😉

This is a very important release, with a brand new cool feature!

Please note that this is a beta.
Report any problem in the support forum.
You can disable this anytime.

The european GDPR law is approaching!
Because of this, YASR, from version 1.6.1 doesn’t save anymore the IP Address by default.

If you want still to save the IP, you can set to “Yes” this option in the settings:

This is an important update for who in the past bought one or more extensions: from today extensions will no longer be developed individually, but they will all be included in a single paid version of YASR, which will be called YASR PRO.

I’ve already sent an email to all of you that has an active license, it was this:

AN IMPORTANT UPDATE IS COMING FOR YASR

Hey there!
This is Dario, the author of Yasr -Yet Another Stars Rating.
You are receiving this email because it seems that you have an active license, for one or more extensions.

What’s new?
Starting next week the extensions will no longer be developed individually, but they will all be included in a single paid version of YASR, which will be called YASR PRO.

What happens to your license?
If you have purchased a license for a single extension, you will have a new license for YASR PRO, with the same expiration date as your current license. So, you’ll have more features, for free 🙂

if you bought a bundle instead, your new license will expire after an additional 4 months from the original expiration date

How to get the new license?
Just write back to this email, indicating your current license.

If for some reason, you didn’t get it, just submit a comment here.

Yasr 1.5.8 has been just released, with some amazing news!

First, you surelly noticed that the Yasr Settings menu is not anymore under the WordPress “Settings” section but is a top level menu now:

But the exciting news is another one! A long awaited feature is now available: it’s now possible to delete the unwanted votes! To do this, just need to open the “Log” page under the new “Yet Another Stars Rating” menu.

Hope you will enjoy this 🙂

This fix the shortcode yasr_most_or_highest_rated_posts shortcode.

I should have broke it some versions ago, but discovered just today thanks to Paulo Seth https://yetanotherstarsrating.com/f-a-q/comment-page-4/#comment-26142

Soon will be available new features 🙂

This is an important update because reduce a lot the number of the queries in the archives pages.

I’m happy to announce that from today Yasr is again an active and maintened Plugin.

I’ve been away from almost 3 months.
I’m sorry for this, but now Yasr is finally coming back!

Many other features will be available soon!